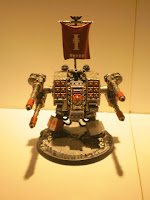 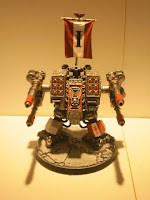 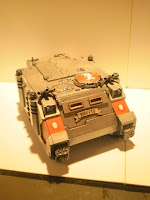 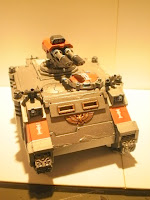 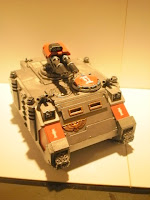 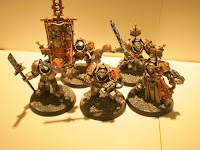 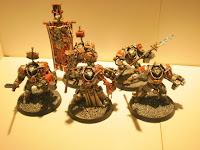 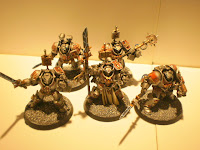 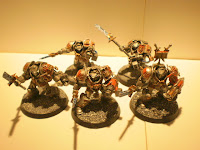 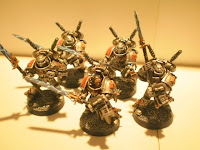 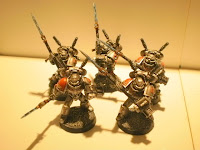 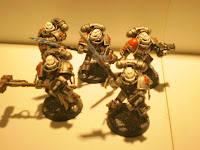 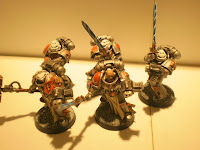 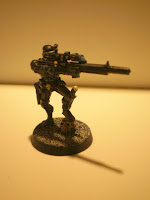 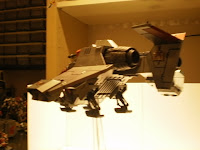 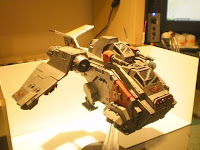 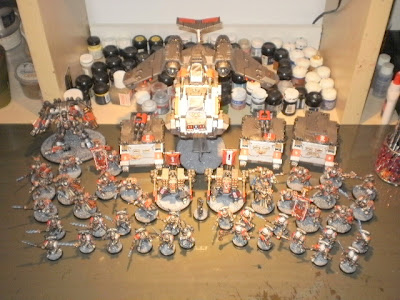 Once again it has been a while since I put a post on this blog here, guess life can busy sometimes. Anyway, here is a project I finished a while back and have just got around to posting it now. As you can see these are the new Grey Knight models that were released last year sometime. I have to admit the sprues and kits are very nice and there is a lot potential for conversion within the Knights themselves or for use on other projects. I personally used some of the packs for a squad in a personal project. There is an abundance of weapons, whether a gun or bladed weapon. As for the project it was a pretty straight forward job like usual. I have painted knights before but a long time a go. What i did was built the models and then primed them black to start, Easy. Next I then sprayed then in Pig Iron with an airbrush. The color is from the P3 line, covers better and I like it a lot better then boltgun. The same color pretty much. After that I then washed all the models in a slightly watered down Badab black to give the models back there definition. After that i went back over them with the pig iron to give them back there color and then highlighted using the cold steel paint from the P3 line again. I like there metallics and they are very close to the GW paints of the same type. After i highlighted them with the Cold steel I then went over them again
with a small amount of Mythril silver to make the armour pop a little. I then added red to them, using Mechrite and Blood red to achieve the color and highlighting with a small amount of Vomit brown. After that I did all the small details like the seal and eyes. The eyes were painted using Sky blue then washed with asurmen blue and then a small dot of white added to make them pop. And not to forget the weapons, they were all painted with an energy effect to make these guys look even more bad ass. The energy effect which is suppose to look like lightning is painted using a few colors and a fine details brush. When trying to do this, don paint any straight lines, you want them to be wiggly and crooked like the real thing. I started by painting the blades regal blue then using ultramarine and sky bue to make the energy effect leaving a little of the last color showing through in spots. After that I went over them again using some space wolve grey and Skull white to make them snap and give them the right look of like they are electrically charged. Other then that, another beautiful project finished and another satisified client. Till next time.
Labels: Grey Knights