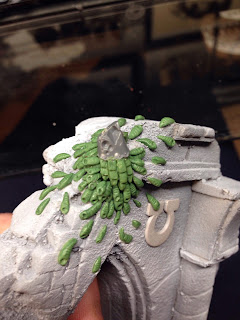 This past Christmas i was gifted the beautiful Mortarion kit from Gw. Being quite busy since than I havent had much time to get to it, hut found some this past weekend. And yes I know it's been a while since I posted so figure kick this back off with a bang. After figuring out how to tackle this project and wanting a different feel than the standard pose I decide to get really ambitious and try something out there. Cant reveal nuch right now but here is the start of it. Since I want to give him an angel of death feel I felt nothing says reaper like decay and death, so maggots were needed. And every where the primarch of the death guard goes only plague follows, only stand to reason his touch would be just as such. Sculpting has been challneging but enjoyable and still much to learn. But for now its a good start to please father nurgle. Enjoy. More coming soon.
No comments:
Labels: Death guard, Mortarion

So it has been a while since I last posted on the blog, sometimes life gets in the way. With that being said, now onto what you see before you. This the new Chaos Heldrake kit from Games Workshop. It is infact a nice kit right out of the box pretty straight forward to build. I generally love converting models so when I get something new they generally never get built how they appear on the box. So I went to work on it. I did not want to do it the normal looking way and had to really think about what I was doing when I started this project. I want to the body to be more upright which means I had to reposition the legs in a fashion to hold the weight and have the model balanced. I made a few small mods to the legs and feet to get what I was looking for, nothing serious or really worth mentioning. The body of the model had a big gigantic hole in it where the flyer stand would normally mount and this was an issue, cant' have a hole in the middle of the model, just would not look right. So with some plastic-card and green stuff, I went to work removing this hole. It was pretty straight forward and turned out awesome. Now came the hard part the neck and head. The neck had to be cut into 3 sections to get the right angle needed to make the pose look right. And then re-glued and filled back together. This also helped to get the head in the right position as well, there was a lot of green stuff added to the neck and I am not 100% happy with it, but it looks alright, I have seen worse. So with the head in the right spot and the neck properly postioned I moved on to the arms. Now the kit normally has you attach the wings to the arms but I felt that after trying it out it just did not look right at all with the pose I had started working on already, and starting over was not an option. So the wings were removed from the arm assembly, well they actually were never attached, but anyways. Now there were voids in the arms cowels and plating so they had to be smothed out and filled plus the arms had to be cut and repositioned because the current design did not work. So I cut them at the spot where an elbow would be and used parts from the Defiler kit in the arms to create an elbow. Easy and effective, now I could positon the arms accordingly. And that is what I did. So all that is left is the wings. With the wings I removed the ball socket joint on the end and gave them a flat edge where that portion of the piece was before. I then found a parttern that I felt would work perfectly along the back, with a little inspiration from a yu-gi-oh dragon card I recall seeing. And there you have it the model was built. Now I needed a place for this bad ass to stand that would still have the same height as the flyer on its stand and thus the base was created using Green stuff and cork board. The flames were all hand sculpted and the rock are made from layering cork board. I then added a modified guardsmen to the base to give it some life and story. As for the paint it speaks for itself and overall I feel it turned out awesome. I spent a lot of time on the paint and it would make this post extremely long, so I will save that for another time. Next up on the blog a Blood Angels Hero, till then.
1 comment:
Labels: Chaos, Heldrake Conversion 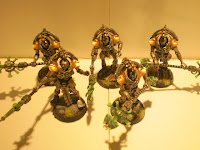 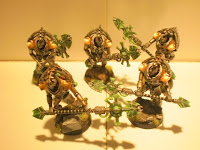 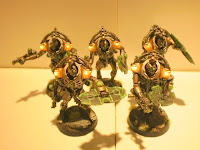 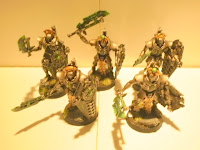 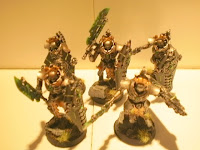 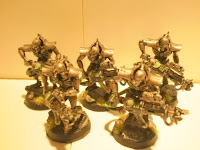 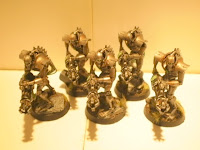 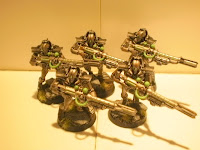 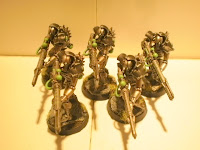 Well here is the second part of this commission, like i said in the previous post I had finished these up just after they had come out. I must admit before talking about the work itself that the new Necrons models are very well sculpted and highly detailed, very sexy models to say the least. As for the work, the models were painted in the traditional silver color with a little bit of black and gold mixed in give them there own look instead of being like the ones on the box. All the weapons have had a green energy effect painted on them which I felt really made the model tie together and give them that cyber-esque look 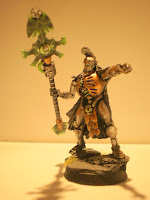 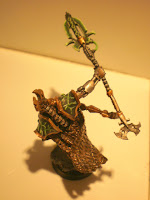 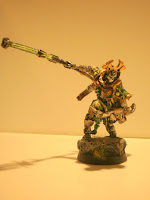 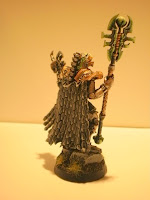 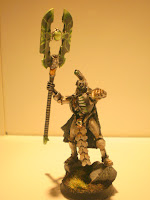 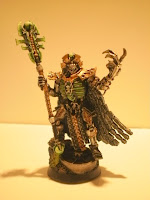 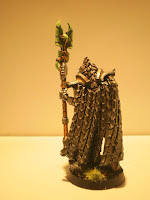 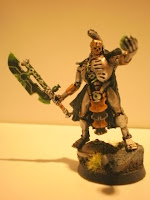 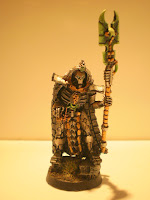 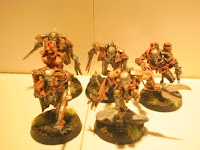 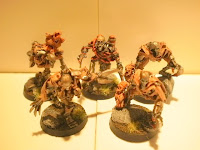 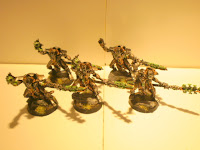