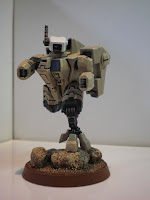 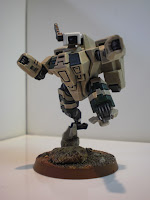 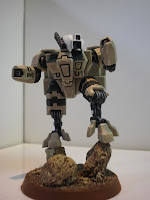 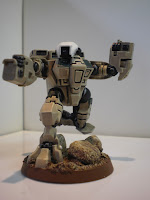 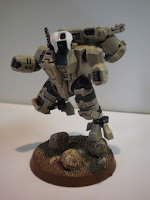 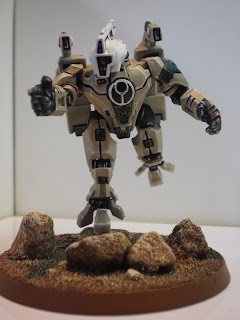 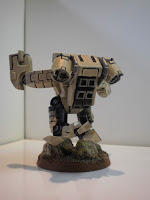 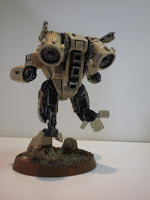 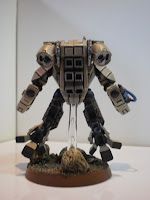 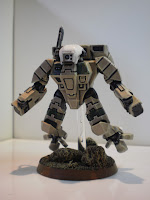 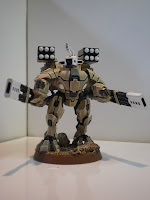 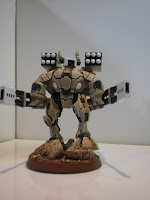 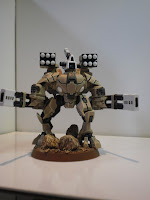 Alright so here is the last part of this amazingly large project, the Crisis suits. Now none of the models have weapons because they are all magnetic and I didn't put them on when I took the photos but i will try to up load them to show you what they look like, nothing fancy, but just in case you are curious as to how they turned out. All of the suits have been converted with some of the suits engine packs being heavily converted. As you can see from some of the photos the middles of the packs were removed and the chutes were put together and then marine jump packs chutes were added to the sides, which looks amazing. I did not come up with this idea but was
taken from a another project the client had found. So who ever thought of it, thank you. The suits were all reposed to give them a more dynamic look then the standard static look they normally have. Also the broadsides had the guns shortened down to be a little more compact and less likely to break. I though they looked better with the shortened guns. In addition to this all the weapons were painted and magnetized so that the client could try different weapon setup, this was a long process and took a lot of time to paint since they were all of the sprue, this made them hard to handle. The paint job was pretty much the same as all the previous parts of the project, Hammerfall Khaki from P3, Skull White and Dark Angels Green. Which were all highlighted with a brighter colour other then the white which was shaded using greys. The bases are made from stone and gravel and then painted in a desert style theme as you can see from the pictures. Another project complete and overall I am very happy with how it has turned out and the client was even happier with it, since it came out exactly how he wanted tit to look. Well till next time, and if you have any questions feel free to email me and I will do my best to get back to you. Keep checking back for more projects.

I don't know if I was the first to add space marine jump packs to crisis suits, but you're the only other person I've seen do this.

I really can't wait to get to work on my tau again...check out my blog in the next couple weeks to see some new crisis suit conversions...

Crazy. This army looks almost exactly like mine, from color scheme to conversions. Tauofwar.blogspot.com. nice job!