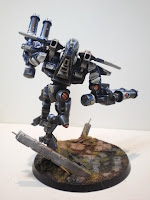 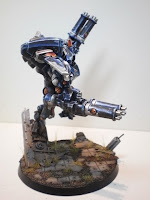 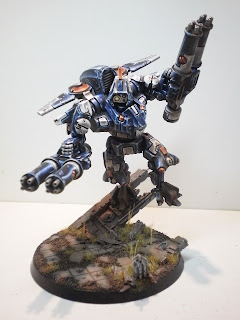 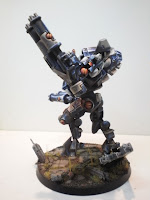 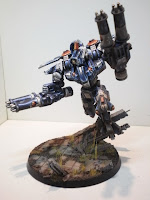 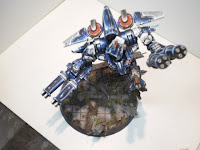 Last summer I attended Gamesday in Baltimore. It was a great event and will be going to the Chicago event this year. So I obviously went and lined up for the Forgeworld at the event. Now if you have ever been a Gamesday you know you have to get in line quick becuase stuff sells out fast. So as I am standing in line to get something else I was flipping through the catalogue and noticed this battlesuit, the XV-9. Now I have never been a big fan of the Tau Crisis suits, just not my cup of tea, so to speak. But this battlesuit really nailed what I felt a battlesuit should look like, great sculpt. So I picked one up. After looking at it for months, I said to myself " why u still sitting there?" and began building it.

I wanted to give the model a pose that would be seen on the battlefield, nothing static, but something realistic. After many hours of dry fitting and posing, I finally came up with what you see. Now I knew that the model had to be standing on something to get the exact pose I wanted, so I stopped building the model and went to work on the base. I'll come back to the model in a minute.
The XV-9 comes with a 60mm Base unlike it smaller brothers which come with a 40mm. This makes a big difference in what i could do with the base. I wanted to keep the base reasonable clean and simple, to give a more realistic overall look. I used plasticard to make the broken stone tiles and the ruins are Gw building pieces. I chipped and carved away at the plasticard tiles to give them a more worn appearance and drilled and carved out bullets holes in the ruins. I then painted the base using various greys and browns. I also added some long grass and static grass to make it look a little older then fresh rubble.
Once the base was finished, I built the model and went to work painting it. I wanted to change it up from my usually style of painting. I based the model black then gave it a coat of 50/50 chaos black and regal Blue to get a nice deep blue undercoat. After that i started adding grey to the original basecoat mix and working up in a metallic style of painting, Something  I sort of adapted from painting nmm. I continued to add grey and then white to the mix and then worked up to achieve the look I was after. After painting all the blue and making sure I highlighted in the right spots to give the model more depth, I then had to some up with a good accent color. I went with white, which i then shaded and highlighted using greys once again. I then added a little bit of red in the model to break up all the white and blue. Again everything was painted in a light source technique using painting techniques used in nmm. The focal point of the model is suppose to be the head so I painted the lens yellow so it really contrast against the white and blue.
After the model was painted and fitted to the base I wasn't finished. I started to add the battle damage and chipping to the armour. I used a reverse technique to geth them to look as realistic as I can, kinda of a newer technique to me, don't do it often. I had to do it on this guy to give him some character. After completing the damage on the model i went one step further and put my new FW powders to used and dusted the base and lower portion of the model to add more realism.
Overall I am very happy with the overall look of the model, so much so i have built another that has been converted ot be my commander fo a small Tau force i have been inspired to build just from this bad boy.
Well till next time.
Labels: Golden Demon, Tau