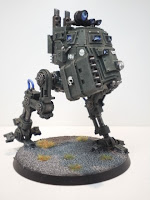 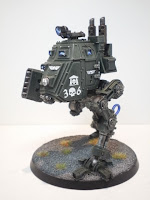 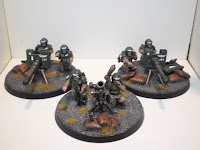 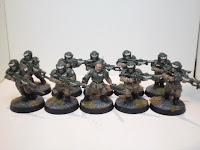 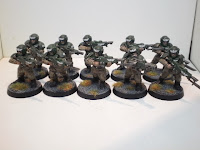 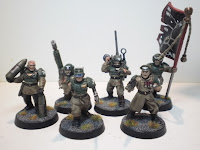 I seem to paint a lot marines and was nice to get some guard for once. I don't see them very often so it was a nice change. I was asked to paint them in the Cadian colour scheme which is pretty straight forward and probably one the nicer colour setups for guard. It was a rather smnall project only consisting of the contents of one the battleforce boxes. The only model I had to add to the battleforce was a Master of Ordnance. He was quite easy to create, Standard guard legs and some of the extra command squad bits. The 2 missiles or bombs whatever you want to call them are from some of my spare bits from the Death Korps of Krieg project I did a while back. The hands had to be modified to hold the bombs/missiles. That was probably the hardest thing to do. Other then that building the models are pretty easy the only thing i did differently was make sure the sentinel was fully armoured, just looks better in my opinion. The it was on to painting which was straight forward, nothing special. Just follow the traditional color scheme. Overall they turned out awesome and I really made me think about painting up my own guard, but then again it will be a lot of models.
Well up next I will post an Imperial Fist project and then a Space wolves project that I championed in 2 weeks, it is quite a feat.
Labels: Imperial Guard