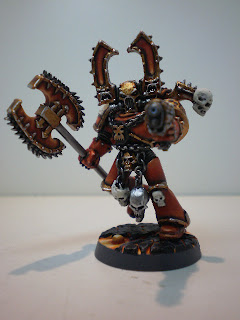 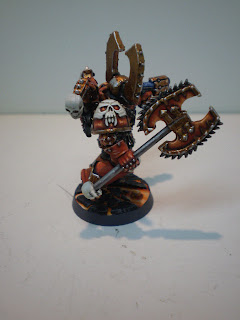 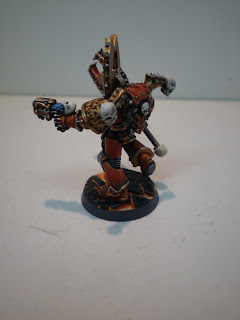 Well another project I have been working on for a while. This time it is my version of Kharne. If your not familiar with him, he is from the Chaos Space Marine Codex. Now GW already has a old dated model of him and this was meant to be a more updated version of him. I used the basic pieces from a Khorne Beserker and only a few pieces from the original Kharne model. I felt he deserved a little more then a standard Khorne Chain Axe. So I made a larger one from 4 Chain axes and a piece of brass rod and 1 skull. Pretty easy to do. The head and back pack were just taken from the original. The plasma gun was cut from the arm and mounted how you see it. Also I know Kharne has an arm exposed but I wasn't able to find anything I liked. So he is in a full suit of armour. I also changed up some of the colors and painted lava into one of the shoulders pads. Within that, is the symbol of Khorne. Green stuff was needed to mount the arms the way I wanted them. He was then mounted on Lava base. I felt it added to the evil that the character exudes. It also ties in with his shoulder pad. The model also has a display plinth that he stands on. Once again I feel I di a great job bringing an old model to new life and I always love projects like this. Till next time.
Labels: Chaos

And I am one satisfied customer.

wow this is hell cool man! im gonna try my hands on this!!! amazing model man!

this is a nice model man!! i'm gonna try my hand on this now! :) hell cool model!