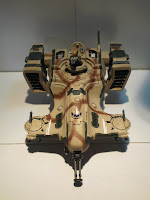 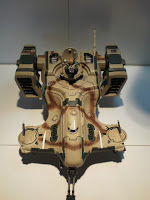 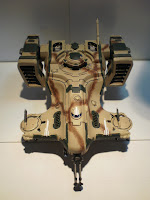 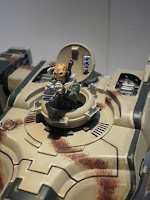 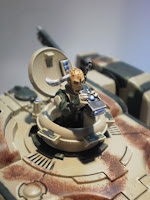 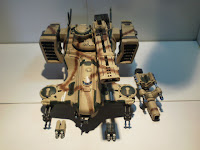 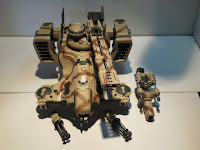 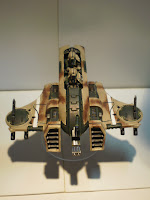 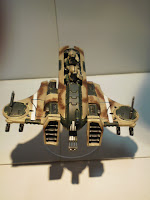 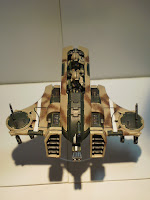 Well a while back I got a commission for a large tau force with a lot of conversions. And when I say a lot, I mean A LOT! Almost every vehicle battle suit and soldier had to either have magnets added to it or needed to be reposed. Most of it was a blast to do and I learned a lot about magnets. But you don't want to hear about that you want to hear about the first part of this army, the vehicles. Well if you read this and not just look at the pictures then I will tell you that I had to paint 3 piranhas, 3 devil fish and 2 hammer heads. Most them were put together straight forward but some of them need a little more work then normal. For example, the hammerheads needed to be able to swap out there weapons for different setup and thus magnets needed to be used. Now figuring out the magnets for the big weapons like the rail guns that
sit on top were pretty straight forward but the pods that have either the burst cannons or missile pods in them were a little trickier. But i pulled it off and if you want to know how it was done then drop me a line. Now about the paint job, this is one of the few projects where i have used paints other then GW and as of late I have started to venture outside of the GW paint line for many reasons that I won't get into. But i used Hammerfall Khaki from the P3 line for the base coat as it is very close to Kommando Khaki, which i find is one of the companies thinners paints and a little harder to work with when it comes to doing base coats. After that I used Orkhide shade on the green and highlighted with Catachan and Camo Green. After that I picked out most of the details like black which was highlighted with codex and fortress gray. The Khaki was highlighted with Bleached bone and a little white. Once I had 95% of the model painted I stippled on the brown effect onto the models instead of airbrushing in case i made a mistake. After that was done I went back and fixed all the mistakes that the stippling cause which was very few. I don't like to leave errors on my models and pride myself on making sure everything is done right and not half way. Now that the stippling was done I then painted on the white markings to give each vehicle a different designation. Overall I am very happy with how the vehicles turned out and for the most part the entire army. But you will have to check back tomorrow to see the Battle suits. So don't forget to follow me and see the projects here before anywhere else, till next time followers.