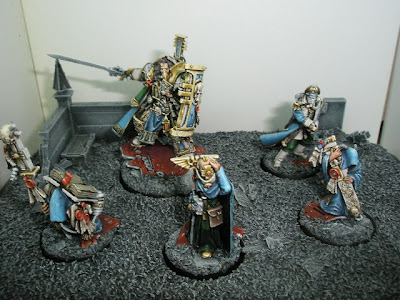 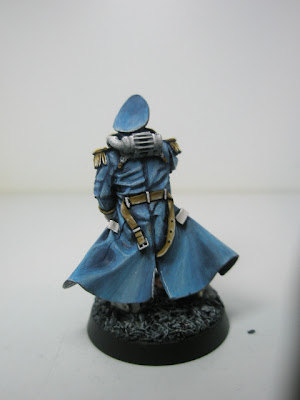 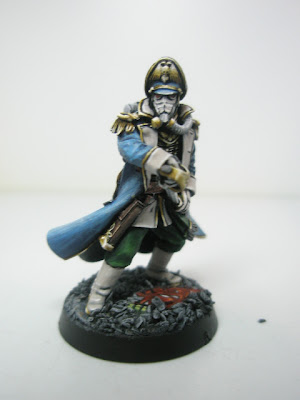 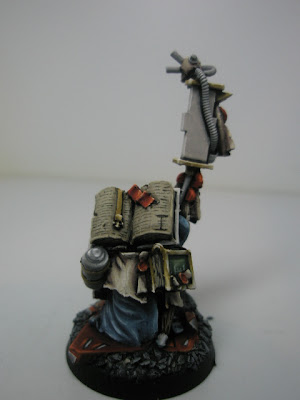 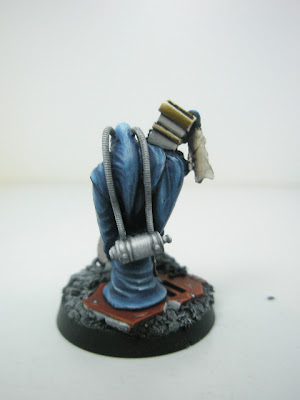 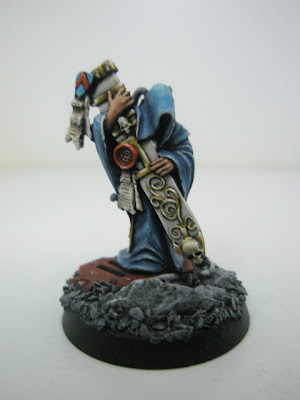 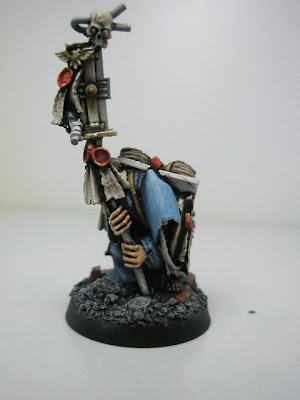 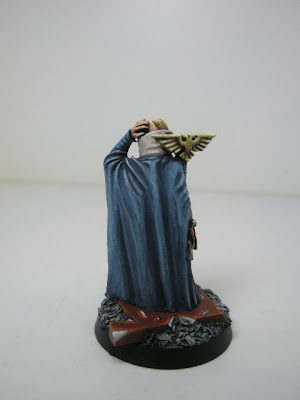 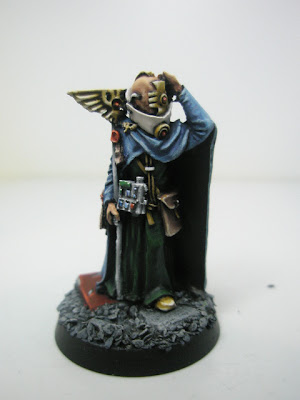 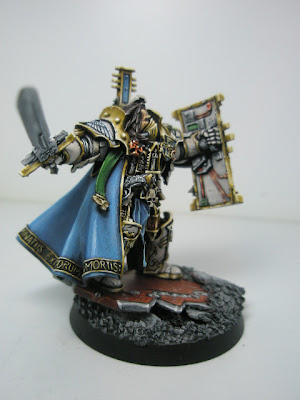 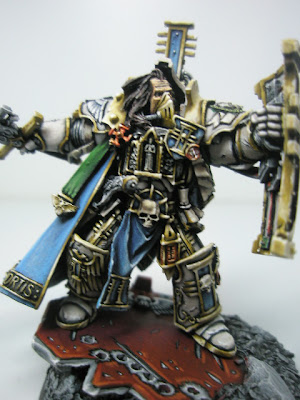 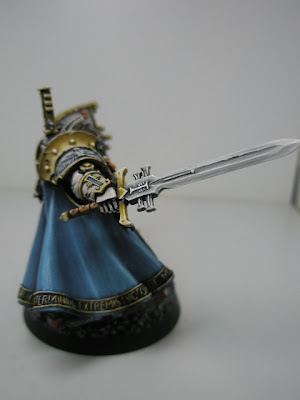 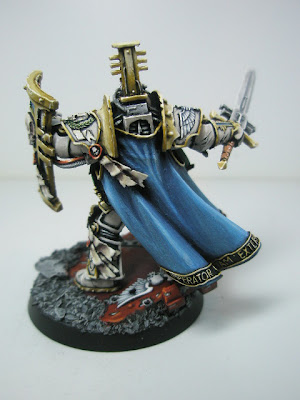 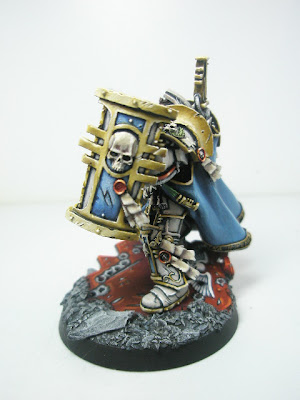 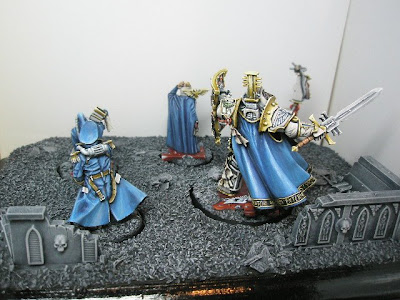 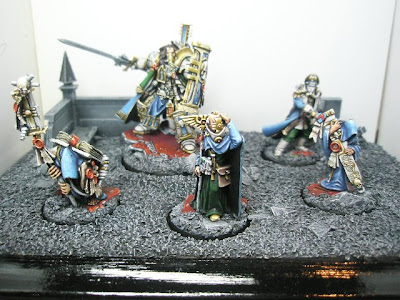 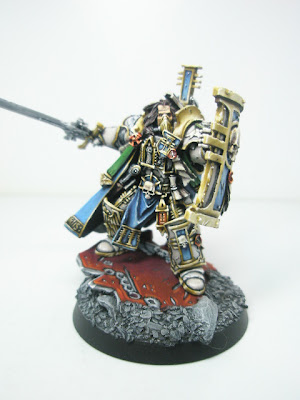 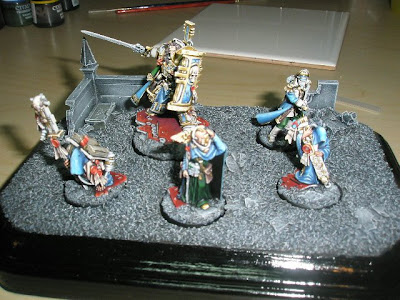 Well I saw this model on Forgeworld a while back and soon after it was released I told myself that I wanted it. With the Sheffield Irregular May Painting Challenge and the Golden Demons in Toronto about 4 weeks from now I ecided to paint this for both challenges. Well Hector Rex only comes with a 3 man retinue and both challenges are for 5 man squads I decided to keep with the Forgeworld and Vraks themes and add a Death Korps Comussar as a Veterans Guardsmen to make the Squad legal for both the game and competitions. So now that I have a legal squad for both challenges I took upon the task and challenge of painting these models. And so I will tell you that story.
When it came to painting the entire squad I wanted to try multiple techniques that I usually use on a one of a kind model or centerpiece on this entire squad. After deciding that I was going to paint them with difficult and time consuming techniques the next task was the colors and theme. What I came up with was all Blue for the cloaks and NMM gold for gold areas with a little splash of red and green thrown in for the seals and scrolls and the armour a very light greyish-white. Also I wanted to paint everything in a light sourced effect and give shades and highlights to every little detail.
The colours I used for the cloaks was Chaos Black, Regal Blue, Ultramarines Blue, Ice Blue and Skull White. I Started with a 50/50 mix of Chaos and Regal to get nice even layer to work with, from there i startedv applying thin layers of Regal Blue until I was happy with the finish. From there I started painting very thin layers of Ultramarines Blue with each one followed by a glaze of Regal Blue. Once I had all the Ultramarines Blue done and was ahppy with the blend to the Darker regal I then started with Ice Blue and did the same thing as before applying thin layers followed by a glaxe of Ultramarines Blue, and from there I went to pure white followed by a few glazes of Ice Blue to blend it all together. I used the layered blending approach and probably put about 40+ hours into all the cloaks, with about 60 layers on Hector's Cape himself.
When it came time to paint the NMM gold on all the models I did themm one by one, I started with Bestial brown and applyed a nice thin even coat and then worked up to Snake bite leather using thin layers. Once i had the overall finish i wanted i started to add small amounts of Bubonic brown to the snakebite on a wet palette. Applying thin layers and adding more bubonic I started to paint the areas that would be reflecting light a showing the true colour of gold. When I reached the point in which i was pure bubonic i started adding in a small amount of hite and painting the highlights in very thin layers till I was almost a pure white. The final touch was justa small spots of pure white on the corners and few other areas. I did the NMM silver in the same fashion but only using Chaos Black, Codex Grey, Fortress Grey and Skull White. Again painting thin layers and using glazes to acheive a smooth blend with the colours. This can sometime be very difficult on some of the smaller more detiled areas, and ths is where you really need to take your time or it could ruin the look of your model.
For the Green on the models I used Dark Angels Green, Kommando Khaki and Skull White. I started with pure DA green and added small amounts of Khaki to gradually and subtly to acheive highights since I wanted to keep the green a little dark. The last stage of highlight I added a very small amount of Skull White to the final mix of Khaki and Green.
The Red I used Mechrite Red, Blood Red, Blazing Orange, Fiery Orange and Skull White.
All the pieces and parts on the models where painted using a wet pallete and I have tried to blend all the colours to give more depth and feel to the moddels. In all it took me about 100+ hours over 3 weeks to paint the entire squad and fortunately for me I finshed it in time for the May S.I. challenge.
I pushed myself and challenged my abilites on this project since I have never tried to paint an entire squad using the NMM technique and blending every little detail on the models. I do not think that I have ever painted an entire squad to this level and this is some of my best work to date. If you have any questions or would like to see how something was done feel free to message me.
Labels: Forgeworld Hector Rex, Golden Demon