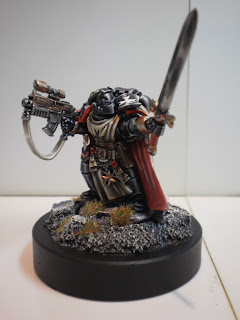 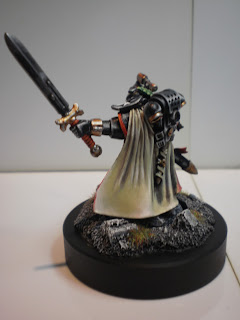 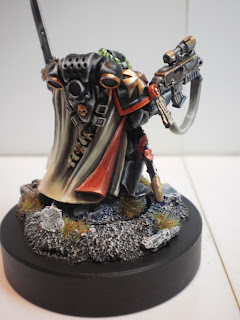 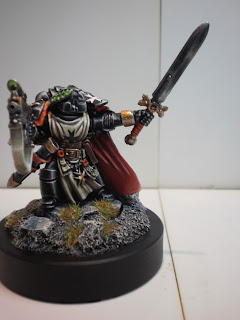 Well here is another project I had been working on for some time.  He is a Black Templars Sword Brethren that has been converted, well you might be thinking doesn't look like it was converted, but surely it was. I acquired him off of ebay for a few bucks and then as soon as he arrived I got to work on it. He is a 3 piece metal model and I knew right from the start that some of the conversions might be a little tricky and could end up damaging the model if I wasn't careful. The biggest issue was removing the head with a dremel which took a while. Once I got the heads removed I then fitted him with a Champion plastic helmet from the command squad box. This was simple I just had to cut the small bump under the helmet off and file it smooth. Once the head was attached I had to attach a new boltgun with strap and a power sword similar to Helbrects. In addition to this I added a sword sheath on his hip. Once the converting was out
of the way I mounted him on a Dark art miniatures Display base with a removable base, never know if he will get played with. Then the painting began I painted up in the traditional Templars colors and change some spots to a gold bronze color instead of red. I then highlighted the armour in a different style then I normally do. Most items I highlight the edges of a model. but in this case I did a sort of light sourcing and found that it is a nicer way to highlight black armour. If you would like to learn how to highlight in this manner then shoot me an email. Once again I am very please with how the model turned out and really look forward to painting more black armour in this style again. Till next time.
Labels: Black Templars

hi,which colors did u use to paint the black on the converted sword brethren/captain, it is absolutely stunning