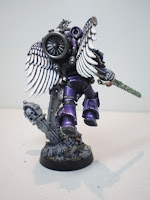 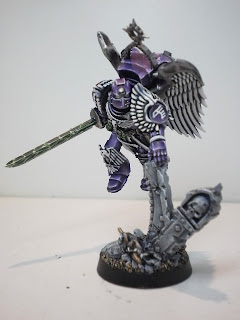 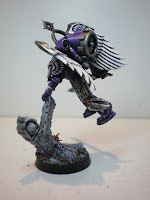 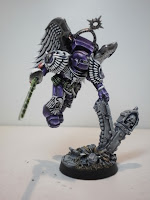 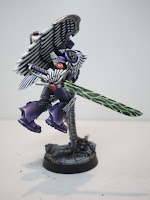 The Avenging Angels is a concept Idea for an army I was planing on building in the near future and to see if I really liked the idea. I decided to build what would be the Captain. The model was built using various parts form all sorts of kits.. The torso is from the Forgeworld Korvydae model, most of the other pieces are from the Blood Angels Sanguinary Guard box with  he exception of the Iron halo which I took from the Ironclad Dreadnought box. The base was made from pieces from one of the GW building kits and the Astral Claw logo from atop of Huron's banner.I wanted to give the model a very dynamic pose, as if he was leaping
into battle. I'm not one for the static poses, so motion in the model was necessary for me when building him. He still remains nameless.
As for the painting. It took me about 3 weeks to paint with lots of long days going over the same spots with layers upon layers. I went with purple because I have always had fun painting that specific color. Once I decided on purple and I felt the only reasonable accent color other then black would be white. So purple and white it was. The models was painted using a light source technique and I applied the same methods for painting NMM to this process. After i had finished painting on both of the primary colors I then went with silver for a accent color and made sure to not paint it on in too many spots. All that was left after that was the sword and it was only fitting that I paint it green and give it a energy effect to really draw your eyes towards it. Overall I am very happy with how it turned out and have really given a lot of thought to adding a few tactical squads to join this dude and make a small force, but that won't be anytime soon.
Gamesday just pasted about a month ago and I was fortunate enough to be able to enter him in the Golden Demon 40k single category. Where he made the first and final cut only to place in the top 5 and almost win bronze in that category.  Every year I enter i get closer and closer and closer to placing. Maybe i should take more time and focus my efforts more on one model for next year, but it does get kinda hard when you have to paint models for other people at the same time. Well anyways I can only keep practicing and try my luck out next year.
Well if you have read this far then by all means leave a comment or even ask me a question about the model. I don't mind helping out other artists. Till next time.
Labels: Golden Demon

The model is really nice. I love Korvydae and his dynamic pose as if he was running on his ennemys or take off. Awesome work. I hope you'll win the sword next time.

Wow, this guys just looks SO awesome! I love it
Keep on the great work
Cheers