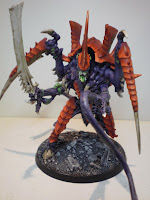 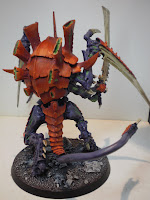 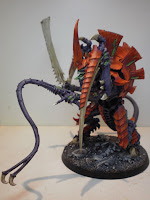 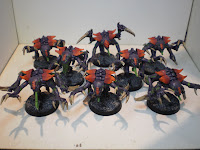 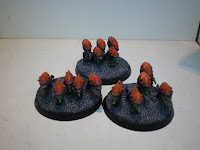 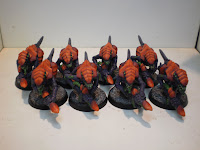 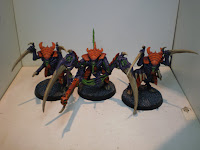 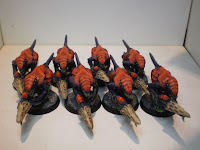 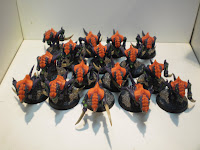 Well I don't get to paint Tyranids very often so when I was asked to a commission for them , I jumped right on it. I had painted some Tyranids last year for the same person, those models were part of the new Space Hulk set that GW released. So he wanted them painted in the same purple that they were with the only difference being that the armor plates be painted red. With some of  the inner parts painted in a glowing green.

The models were only to be painted table top quality. Other then Hive Tyrant which I went a little further on. As for the basic battleforce units there were basecoated purple then washed with leviathan purple. After that I painted all the inner parts Knarloc Green and then went back over them with Scorpion Green, followed by a Thraka Green Wash. After that I painted the armor plates Mechrite Red then went back over them with Blood Red and Blazing Orange, followed by a
thin wash of Baal Red. The Bases were pretty straight forward Ash waste look that seems to be the standard for most 40k models lately. Also I gave the Tyranid Warriors bone sword. I made them from plastic card and used one of the scything talon arms and removed the talon and replaced it with the new plastic bone-sword, They turned out great and were very easy to make.

As for the Hive Tyrant, I did most of the same things as above other then going a little further by highlighting the purple and adding a little white to the red mix for the final highlight to really make him snap. The model itself has some small conversions in it. I moved the position of the whip and modified one of the fingers to make him have a more realistic battle pose. I also shifted the hips and added in some of the newer Scything Talons.

Over all I am very happy with how they turned out and even inspired me to build a small force of my own. Next up on the webpage will be Imperial Guard part 2, these guys are an addition to a recent Guard force that I posted not to long ago. Till next time.
Labels: Tyranids