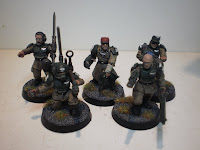 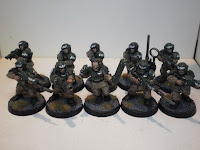 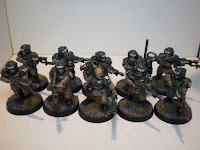 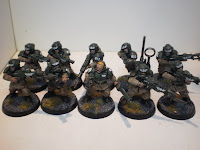 So a few months ago I painted a small Imperial Guard Battle force and now it is time to show you the next addition tot he project. It isn't much, just 3 more 10 man squads and another command squad. One thing I do like about the Guard is that they have huge numbers and when they are well painted they look amazing on the battlefield. Now that the force has close to 100 troops I really think that tanks should be added and believe that will be the next addition. Maybe a Leman Russ or two.

This was a rather small commission, so it didn't take me very long to get through. They were painted in the standard Guard color setup. I start by applying a basecoat of Khemri Brown to the legs and cloth areas of the model, then a Base coat of Dark angels Green tot he armored parts, followed by a Tallarn Flesh for any of the skin areas. After that I went over the Khemri Brown areas with Kommando Khaki followed by a wash of Devlan Mud.
Then I washed the Tallarn Flesh areas with Ogryn Flesh wash and painted all the parts that required silver, such as the gun barrels and ammo packs. That was followed by a wash of Badab Black. Once all the washes dried I then dry brushed the Dark angels Green Ares with Knarloc Green to catch all the edges and make the color snap. For the most part the models were done other then the small details like the eyes and highlighting the skin areas. The final touch was adding the white to any of the Guard symbols on the models. Overall a pretty easy and straight forward paint job. The customer was very satisfied with how they turned out and they match exactly with the first batch I did for him.

Up next on the webpage will most likely be one of my models I just recently entered in Golden Demon at Chicago Last weekend. Which in fact almost placed and made the final cut, making me a 13-time Demon finalist. After that I will be working on a large Imperial Guard force consisting of 50+ troops, 2 Valkyries and 9 tanks. Till next time.