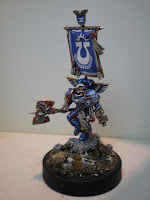 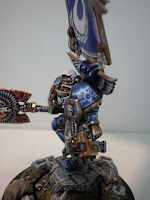 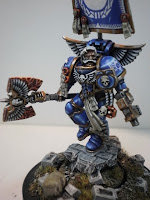 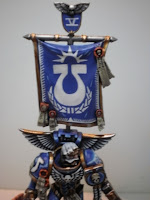 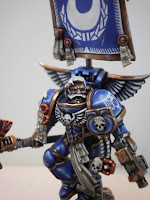 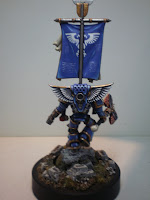 So a few weeks ago I got the urge to build an Ultramarines army and figured I would start with the leader of the entire 1000 pt army i plan to build and then work from there. Even if I decided at a later time to not build the project I would still have a pretty sweet looking model for the display case. I have always love the Ultramarines and there whole story and color scheme. Now I know that the 5th company usually has green trim on there shoulder pads, but I felt it was necessary to kinda make this company my own. So I went with Gold instead. On the standard units I will be doing green trim on both pads, but he's the leader so he gets the special treatment. Now when I set out building this model I had a good idea of what I wanted him to look like, an awesome unique backpack, a cool banner, not the standard ones you usually see, and of course a sick power weapon, such as an Axe. So after I dug through my bits trays and found what i was looking for I built the model and what you see is what I cam up with. The it cam time to paint. Now I like adding gold trim to my Ultramarines, just think it looks better then the flat blue, so I will be doing this on every model.
The paint job took me a few days. I started with the blue of course. Then painted
a layer of mordian blue to kill the undercoat and give me a nice solid blue to start from. After that I went with a 50/50 mix of mordian and Ultra blue. And painted all the armor again but leaving the recesses and crack. And after that I washed it with Asurmen Blur to give the dark areas an darker blue with out having to paint it in. I know I cheated a little bit. After that had dried I painted the model with just Ultramarines blue in a sort NMM/Monochromatic style, adding small amounts of gray and white to the mix add painting it in the areas where the armor would shine from light source. I then finished off the blue mix with straight skull white and just made some small brush strokes in certain spots to finish it up. Once the blue was finished I went with dwarf bronze and painted just the edges of the armor all over. I then painted a very thin line of a 50/50 mix of blue and black along the edge to give it some depth. The bronze was then highlighted using shining gold and burnished gold, the final highlight was a 50/50 mix of chain mail and mythril silver. Now that is most of the model was done I went to the face. Well instead of doing normal hair and using a traditional sm face I used one of the space wolves one to ake him more unique and then choose to give him white hair, to make him appear more regal and baroque. It also helped to give the model a more authoritative look. I decided to give him an Axe instead of the usual sword u see on most HQ units. The axe was then painted using the reds and orange and done in a power weapon lightning effect. Something I have been teaching myself to do better and better, so why not I thought it really added a nice look. The banner is from the venerable dread kit from GW. Which is a pretty awesome kit for small accessories. I wanted to keep it simple, so I hand painted on all 3 of the symbols, the laurel, the halo and of course the Ultra logo. I like how it turned out, not over done but still looks nice. So once I finished the front I definitely needed to add something to the back to help balance it out a bit. So I went with Aquila, my favorite 40k logo. I love it som much i got it tattooed on my back, I'll post a pic of it sometime.
Overall I am really happy with how it turned out and can't wait to get started on the rest of the army. Any suggestions on composition would be cool. I will be adding 2 10 man Tactical squads of course which may only leave about 500 points for the rest of the list. What do you think I should add?
Next up on the blog, the Captain for my Avenging angels project, so tell your friend to follow and lets get my followers up to 100. I will be giving away a free character commission to one lucky follower. See ya next time!
Labels: Golden Demon, Ultramarines

Wow, that's very pretty. The only issue is the 5th company have black trim on their shoulder pads, not green (green is the 4th company). But as he's a captain he's probably got licence to do as he likes.

Aside from my nit-picking that's a very beautiful model. You've done well!