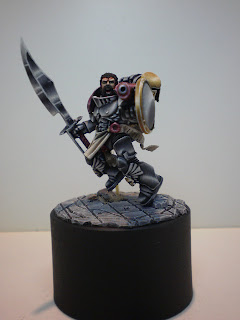 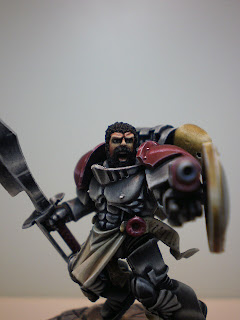 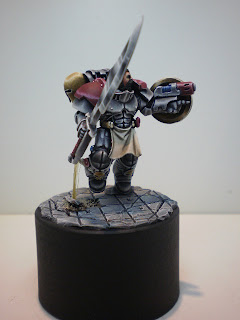 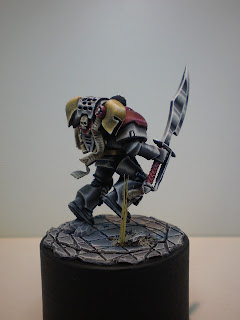 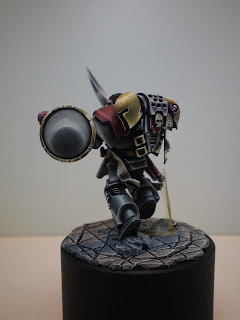 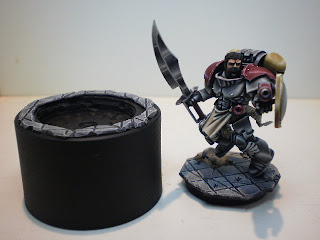 Hello again guys, it has been awhile. All is good with me. This is my Warhammer 40k Single model entry from the Gamesday 2010 event in Baltimore from last weekend. The event as a whole was great with lots of things to do, but the main reason for me to go to these events is the Golden Demon competition. There was a lot of  impressive entries in it, lots of nice work. If you would like to find coverage of the event with lots of photos, then click to the link to join us on Facebook.
About the model, he is King Leonidas of my current marine project called The Spartan Legion. He is used as my current chapter master when used in games which wont be often for him. The model is mounted on a display plinth which I drilled out to make room for the standard GW base. I wanted the base be hidden when mounted on the display plinth. I used various parts from the new Blood Angels sanguinius guard box, some marauder horseman bits, Space marine command sprue and many others, in addition to some plasticard and greenstuff. I removed all the Blood angels symbols from the bits or anything that would not appear right on the model. The sword was made from Plasticard after numerous attempts to get it right.
It took me some time to come up with the right colors I wanted the rest of the army to be painted in. For this model I went a little further with the brush. I won't be painting every model in the army to this standard. Instead of the traditional bronze and red that the Spartans wore throughout history, I decided to change it up and only make there shoulder pads red, with the rest of the armor being gray and adding in some gold to replace the bronze.
The model was painted using various techniques such as NMM and monochromatic. I painted the armor in NMM style using a wet palette and tried to apply the monochromatic technique by only using black and white as a means to shade and highlight. For the gold I painted it using the standard NMM technique with the use of Skull white, Bestial Brown, Snakebite leather, Bubonic brown and Chaos Black. Again using a wet palette. I highlighted everything that was painted on the model using the light source technique. I achieved this by painting everything on the model using layers of very thinned down paint and the wet palette. This will be the other centerpiece to the army, he will stand beside a spartan I purchased from Scibor. Overall the model did very well at the Golden Demon competition. The model placed 6th in his category. I am very pleased with how the model turned out and I believe it is some of my best work to date. Now it is time to start painting the models that follow him into battle. I have most of them built and will be posting a preview of the rest of the army before I start to paint them. If you have any questions then feel free to let me know.  Till next time.
Labels: Golden Demon, King Leonidas