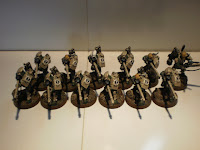 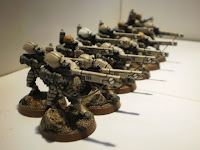 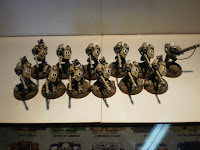 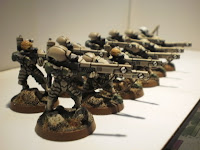 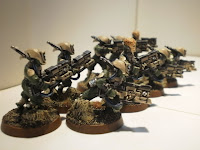 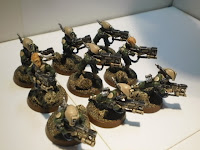 Now we are on to part 2 of 3 of this amazing Tau army I was so lucky enough to convert, build and paint. Theses are troops choices for this army, there are 24 fire warriors and 9 pathfinders, as shown in the pictures above. Now the thing was that the pathfinders were quite simple to convert, well its nothing crazy, but I had to remove to of the metal heads and replace them with actual heads without helmets. Easily done with a Dremel and some superglue. Now as for the fire warriors, I had to use multiple kits more then the 2 used to complete the setup that you see. I had to use
specific arms and position them all to be shooting in a line, which looks very cool. Gives the tau unit some character.  Getting them positioned in the shooting pose was quite easy with a little manipulation of the arms and heads. Adding the straps to each pulse rifle was also very easy to do. I just measured one piece of thin plastic card and then made several copies and attached them using some plastic glue. Also 12 models had pulse carbines attached to there packs to allow them to be used with a different weapon setup, which again I thought was a nice touch. Other then that it was pretty straight forward with the paint job, same colors that were used on the tanks. The only thing that I will touch on about the paint job is that some of the models have non helmeted heads and the faces were painted with yellow skin and a lien spot pattern. Want to know how it was done then email me. But as for this project the best is yet to come, the crisis suits, which have been converted and magnetized, so keep checking back to see the finale of this project and don't forget to follow me to be the first to know, get your friends to follow me as well. Till next time.