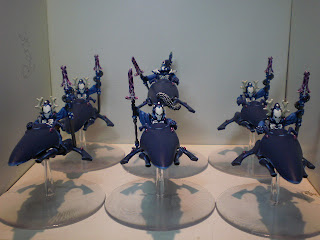 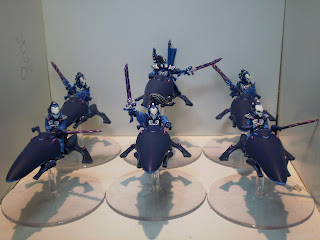 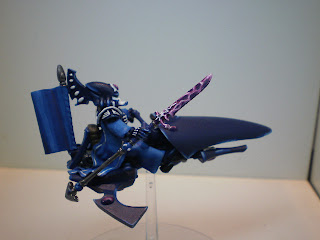 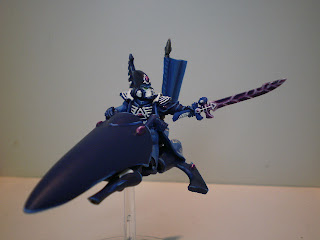 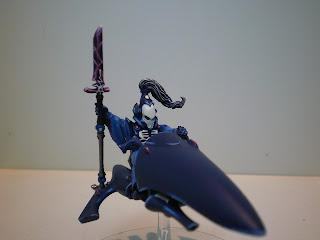 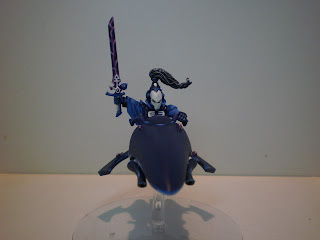 Once again like I mentioned before in the last post I had more jetbikes to finish up and here they are. Now theses are painted in a similar theme to that of the Ibraeysil craftworld. Mainly blue with a hints of white on the armour, such as in the face area. They are converted in the exact same way as the bikes I converted in the past. This time there was 2 units of 6, one equipped with a witchblades and the other with singing spears. The weapons were painted with a them similar to a photo I saw of an eldar warlock a while back. The weapon the eldar is holding had a glowing purple/pink electric look to it in the picture. I wanted to replicate this look on these models and overall I think they turned out pretty darn good. The overall paint job was kept pretty simple to help fit in with the army they belong to. The next project to see the blog will most likely be some wood elves I am finishing up for a friend of mine. After that I will post some of my Gamesday projects I have been working on and some really old star wars figure. Also I have been working on my personal SM project a will showcae some those in the future. Thanks for visiting and till next time.
Happy Canada Day to all canucks.
Labels: Eldar Jetbikes

Simple, but not plain.

Detailed but not overwhelmingly so.

A perfect understatement of power.

How did you do this conversion?